What is trigeminal neuralgia and its causes? 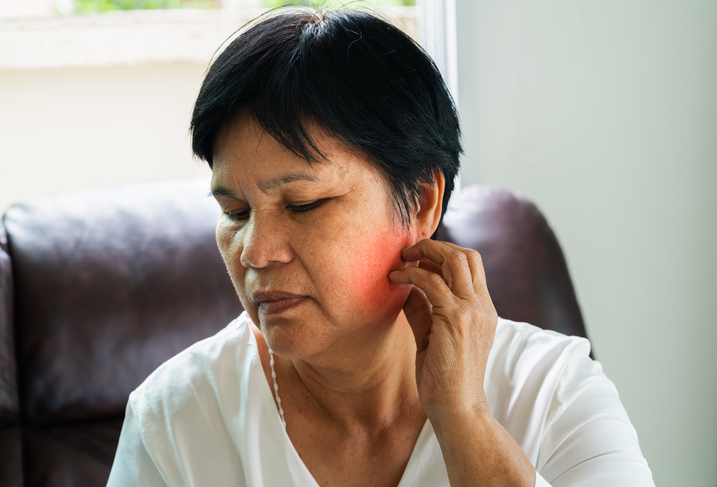 The trigeminal nerve is a facial nerve that can become altered and cause episodes of intense pain on one or both sides of the face. Trigeminal neuralgia cannot yet be cured, but some treatments can control pain.

Trigeminal neuralgia is a disease that affects the trigeminal nerve, also known as the fifth cranial or V pair, one of the twelve cranial nerves. It is manifested by the appearance of intermittent episodes of intense pain, a stabbing nature (similar to an electric shock), lasting seconds, and typically affecting only one side of the face in the skin territory innervated by the said nerve. The pain appears mainly in the upper and lower jaw, nose, cheekbones, and chin, and more rarely on the forehead. Popularly it was also known as a painful tic.

From its starting point at the skull base, the trigeminal nerve divides into three branches: the ophthalmic branch, the maxillary branch, and the mandibular branch. Its functions are to innervate the muscles responsible for chewing and collect the sensitivity of touch, temperature, and pain in the face. Trigeminal nerve injuries, which can be due to head trauma, tumors, vascular malformations, diseases such as multiple sclerosis or others that damage the myelin sheath (the lining that protects the nerve), or infections, produce paralysis of the muscles of the chewing and decreased sensitivity of the face. In general, the problem is due to the compression exerted by a blood vessel on the trigeminal.

A simple vibration to the face, generated by talking, shaving, putting on makeup or smiling, and even a slight cool breeze, can trigger this sudden, painful sensation.

Although it is the best-known neuralgia form, trigeminal neuralgia is not a particularly common disease, estimated to affect five out of every 100,000 people. It is more common in women than in men (60% vs. 40%). In 90% of cases, it begins after 40, being especially common in women over 55 years of age. In 5% of cases, neuralgia is bilateral. That is, it affects both sides of the face.

The evolution and prognosis of trigeminal neuralgia are highly variable. In some patients, attacks of pain can occur several times a day for weeks or months, while in others, they subside spontaneously after a few episodes, without the need for treatment, remaining without symptoms for months.

In most cases, pain can be avoided with proper treatment, at least temporarily. However, none of the treatments (medication, injections) guarantees a complete cure, with surgery being another possibility to explore. In cases of poor evolution, trigeminal neuralgia can lead to a deterioration in the quality of life. When the pain is very intense, patients can develop anxiety, depression, and even suicidal thoughts, although fortunately, this is not frequent.

In most cases, the cause of trigeminal neuralgia is unknown. However, up to 94% of this type’s neuralgias may be caused by compression and distortion of the nerve in the posterior fossa of the skull by an artery or an abnormal vein. The most frequently involved artery is the posteroinferior cerebellar.

A secondary origin of neuralgia should always be ruled out if the disorder appears before the age of 40 if there are neurological alterations in the doctor’s examination when it affects the area innervated by the ophthalmic branch, and when the symptoms are bilateral.

In most of those affected, there are so-called trigger zones: areas of the skin or mucosa whose stimulation triggers neuralgia. The most common stimuli are talking, eating, brushing teeth or face, putting on makeup or removing makeup, and shaving.

Outcomes of breathing in noxious fumes

The Incredible Beauty Benefits of Flowers